Thomas "Tommy" Turner is the future son of Timmy Turner, who was seen at the end of Channel Chasers.

Tommy is a young boy, around the age of ten years old, who lives with his sister Tammy at the Turner's house in Dimmsdale. He along with his sister, Tammy Turner and two adopted siblings, Terry Turner and Tomelina Turner, live miserable lives due to their constantly busy father who is never around, and their evil babysitting android, Vicky-Bot, who usually tortures them with many weapons. Luckily, like their father, they also have Cosmo and Wanda as their Fairy Godparents to make them happy and grant them wishes. Not much else is known about him, as he has no speaking lines (by himself) and is only seen briefly at the end of Channel Chasers, digging up a time capsule with his sister that his father buried twenty years ago. He, alongside Tammy, is a huge fan of "The Prey Bros." (a parody of "The Venture Bros."), the series which take place in the same universe as "Jonny Hunt".

He wears pink clothing and a pink hat, similar to what his father once wore as a kid, although Tommy's hat is a different design. Other than the color of his hair, which is black, and his nose, which is pointy instead of round, Tommy is almost completely physically identical to ten year old Timmy. As a kid/teenager, his voice is similar Tommy Pickles from Rugrats or Buttercup from the Powerpuff Girls, while as an adult, his voice is similar to Benson from Regular Show.

Tommy pic made by Starbeauty91 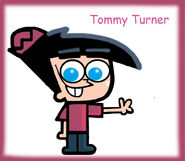 Tommy Turner with a Flower

Tommy 20 years in the future (Another Fairly Odd Future)
Add a photo to this gallery
Retrieved from "https://fairlyoddfanon.fandom.com/wiki/Tommy_Turner?oldid=84286"
Community content is available under CC-BY-SA unless otherwise noted.