Kristina "Tina" Tribune (born August 20, 1992) is a 10 year old girl, minor and fan (not real) character in FOP. She is also a main character from spin-off The Third Fairy Odd Parents . She is totally difference of Timmy, because havent selfish wishes (only sometimes) and have A´s in school, but is bit cowardly.

Is friendly, responsible and nice, sometimes discribed as "Totally Difference Of Timmy". But she seems to be selfish at times, mainly for her intelligence.

Tina is voiced by Alyson Stoner officially. She is voiced by Kath Soucie in future and played by Allison Scagliotti ( adult ) and Ryan Newman ( child ) in live-action movies. She have very high pitch.

She is very smart and intelligent, her IQ is 164. She can speak in many languages, make a DNA tracker and know about time paradoxes. She is perfect A-grader.

She have very good relationship with her god mother. She likes her and for her is best fairy god mother ever. Like pet, have Olive like budgie.

Josh and Tina have very loving relationship of older sister and younger brother.

Kevin is Tina´s older brother. He hate Tina, but babysist her for pocket money. They have something like Vicky and Timmy relationship

Bella is Tina´s cousin. They have very strange relationship, because is changing. In Bella´s debut was her rival, but becomes friend after Tina save her life. Becomes annoying to her and Tina goes to past. After that, Bella begins be Tina´s rival again. In other episodes with her, mocks from Tina, but in bigest problems are good friend and although Tina hate her, make her happy.

Candace is her best friend

She is crush to Tex

Voice actors in another countries

I (DeeDee2510) make Tina only like cameo character, who is friend of Timmy. But later become more important than Timmy and... now who is main character? (you know what i mean). So, few months after make Tina, i make her own Spin-Off. Well, this you possibly know... now more to past! I was think about Tina like Timmy´s twin sister, but fan character Tina Turner already exist. So i give to Tina surname Tribune (i dont know why!).

5 year old Tina and her parents.

Tina and her fairies watch the new fairy. (Kammy)

Quincy: AGGHHH! THIS IS NOT A HAPPY MOMENT!

Tina as a 30 year old, with her daughter Tatiana.

Every forms of Tina and her actors 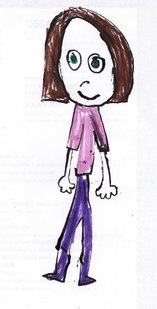 Retrieved from "https://fairlyoddfanon.fandom.com/wiki/Tina_Tribune?oldid=26262"
Community content is available under CC-BY-SA unless otherwise noted.