Timantha Tamara Turner is one of the main characters in The All New Fairly OddParents!, a minor character in the spinoff The Amazing Adventures of Sally and Stan, and a major adult character in The Fairly OddParents: The Next Generation. She is Timmy's twin sister, is born on the same day as him and Chloe, and shares fairy godparents with him.

Timantha wears a bright pink shirt, white boots, pink skirt, a headband with a bow & pink earrings. Like her twin brother, she has brown hair, blue eyes, and buck teeth. Timantha's voice is much higher than her twin brother's, and sounds similar to Bubbles from the Powerpuff Girls, albeit slightly lower. As a teenager, her voice is similar to Harley Quinn from Batman: Arkhamverse and other DC medias. As an adult, Timantha's voice is similar to Ashi from Samurai Jack. Aside from being the youngest, Timantha is slightly taller than her older twin. Her skin tone is slightly darker than Timmy's.

Timantha has almost the same personality as Timmy, except Timantha's personality is more girly & organized. She's smarter than her twin brother, and is nowhere near as selfish as him. Like Trixie Tang, Timantha cares about her looks, though not on an extreme level, and has a hidden talent of being a good cook, where the food tastes better than it looks, inherited from her mom. She also has a crush on Sanjay. 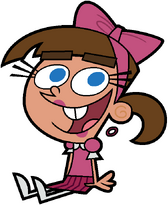 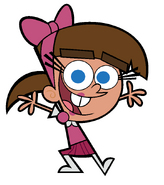 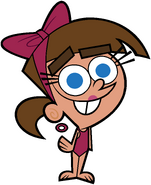 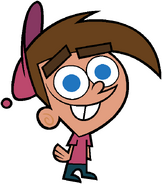 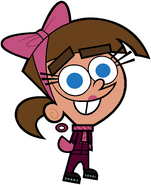 Timantha, Sanjay and other couples wedding

Retrieved from "https://fairlyoddfanon.fandom.com/wiki/Timantha_Turner_(The_All_New_Fairly_OddParents!)?oldid=51911"
Community content is available under CC-BY-SA unless otherwise noted.