Start a Wiki
Tammy Turner is the future daughter of Timmy Turner and Tootie who was seen at the end of Channel Chasers.

Tammy, along with her brother, Tommy Turner, live miserable lives due to their constantly busy father who is never around (their mother is not shown to be around either), and their evil babysitting android, Vicky-Bot, who usually tortures them with many weapons. Luckily, like their father once did, they also have Fairy Godparents to make them happy and grant them wishes. Ironically, their Godparents are none other than Cosmo and Wanda. Other than asking her father, Timmy, what the objects in his time capsule were, Tammy does not have that many speaking lines, and not much else is known about her or her brother. She, alongside Tommy, is a huge fan of "The Prey Bros." (a parody of "The Venture Bros."), the series which take place in the same universe as "Jonny Hunt".

She has Trixie Tang's head band, teeth, and hair let down behind her, as well as Tootie's distinctive glasses, plaid clothing, and mouth shape. She also has Timmy Turner's hair color, hair style (in front) and nose shape. Tammy was given this appearance so that the viewer would not have a definitive idea of who her mother was. Her voice is based on her dad's voice as a kid, albeit slightly higher, and when grown up, she sounds a bit like Twilight Sparkle from My Little Pony: Friendship is Magic, since both Timmy as a kid and Twilight Sparkle were voiced by Tara Strong.

Tammy pic made by Starbeauty91 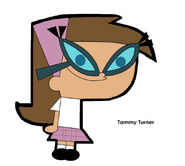 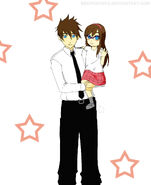 Add a photo to this gallery
Retrieved from "https://fairlyoddfanon.fandom.com/wiki/Tammy_Turner?oldid=76840"
Community content is available under CC-BY-SA unless otherwise noted.