Norm the Genie is a minor reoccurring villain from The Fairly OddParents. He constantly hatches plans to gain his freedom and get his revenge on Timmy, although every time it fails miserably. He is trapped in a lamp made of Smoof. He is voiced and named after Norm MacDonald his first voice actor.

Norm is a Genie that can grant wishes free of Da Rules. Timmy quickly discovers that any wish he made from Norm is usually taken too literally or intentionally misunderstood by Norm, in essence he is a trickster. He enjoys seeing others fail miserably, causing them harm, predicting their wishes for fame and fortune to come crashing down (which they always do). Norm seems to show some sympathy by at least warning his victims of his nature, usually through sarcasm, but the people he encounters are usually too dumb to notice until it is too late for them.

Norm is a genie that can grant three wishes, although he can also apparently grant many more than that if his master wishes for more wishes. He even told Crocker that the latter may use his third wish to "We always tell them you can't, but in reality you can. We've been bluffing for centuries." He has the typical appearance of a genie, including a long goatee and black hair pulled in a fez. He wears gold earrings and teal blue clothing with a red bow tie. He has no feet, instead his lower body flows in the air into a swirl tail, like a ghost.

He talks to other characters with a sarcastic, mocking tone. Norm hates Timmy and has the utmost contempt for fairies. He was willing to ally himself with Crocker, presumably under the pretense of getting rid of Timmy, but Norm found it more entertaining to torment Crocker instead. He seems to enjoy making others miserable as opposed to fairies, who help those they grant wishes to.

[4]Norm tricking TimmyPrior to being discovered by Timmy Turner, Norm resided in a lava lamp which was actually his genie lamp. Although he can grant rule free wishes, these wishes are granted precisely without giving the wisher exactly what he wanted and, in fact, often putting them in danger. Norm hates Canada, and when asked why he simply answers "They've had it too good for too long." He has allied himself once withDenzel Crocker in order to get rid of Timmy forever, but this time, he was more interested to see Mr. Crocker fail every time. He then convinces Timmy through a temporary truce to trick Crocker into going onto Mars by luring him with pizza. He longs to be a fairy godparent and sabotages a "Fairy Idol" contest to become one. He wins (after putting Cosmo and Wanda out of commission temporarily) and later explodes because of magical back-up. Norm also somehow knows the fairy lawyer Fairy Mason. Norm nearly had a nervous breakdown and temporarily teamed up with Timmy to send Crocker to Mars (which he kept suggesting for Crocker to do to Timmy only for Crocker to shoot down that idea).

He plays a big part in the special of "Fairy Idol" as the main antagonist. After reading about what happens when a fairy quits their job, he decides to use this to get out of his lamp. After seeing a photo of Timmy and his godparents, he decides to make Cosmo and Wanda as part of his plan. This is perhaps his most diabolical plan yet, he makes a clone Timmy Turner, who acts abnormally weird to Cosmo and Wanda and abused them, causing them to quit their jobs as fairy godparents, beginning auditions to be the new fairy godparent and he participates to free himself from his lamp. His plan was thwarted at the Fairy Idol competition, when Cosmo and Wanda realized they have been tricked. He then incapacitates them temporarily and bribes Jorgen with a piece of rope and becomes the new fairy godparent and was assigned to Timmy's friend Chester. He was annoyed because Chester constantly called him to make wishes. After seeing Timmy sad, Chester made Norm Timmy's new fairy godparent. Timmy got revenge on Norm by not wishing for anything for two weeks, causing Norm to explode into confetti string (magical back-up), which is what happens to Fairy Godparents when they didn't make a wish for a long time. After he was returned to normal, he quit causing Jorgen to appear to remove Timmy's memory and return Norm as a genie. Norm believes he still won, but Chester then sucked Norm back into the lamp with his last genie wish and get everything back to normal. Norm has not been seen since then and his lamp is presumingly still with Jorgen as of now. 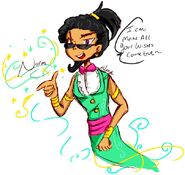 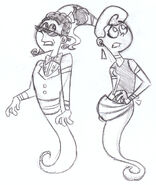 Add a photo to this gallery
Retrieved from "https://fairlyoddfanon.fandom.com/wiki/Norm_the_Genie?oldid=32169"
Community content is available under CC-BY-SA unless otherwise noted.