Vicky and Tootie's mother is a minor characters who has appeared in a number of later season episodes focusing on either of their daughters. She was first introduced on screen in the television movie Channel Chasers alongside her husband where they were reluctant to provide information on their daughter Vicky's meanness to Mr. and Mrs. Turner and immediately shooed them out of their house when they realized the Turners' may be onto Vicky's unusual behavior. Nicky and her husband are rarely ever seen apart from each other in any of their appearances.

She wears thick dark round frame glasses and has dark hair, resembling Tootie, but with pink eyes like Vicky.

"Look at the time, is it that late already? Its a shame you have to leave.. and.. and.. never come back!"
— Nicky, Channel Chasers

Unlike her daughter Vicky, she is fearful and cowardly, and is usually completely unwilling to stand up to her daughter Vicky, even if she is abusing Tootie or Timmy in plain sight of her. Unlike other adults on the show, she and her husband are not fooled by Vicky's sweet talk, and in fact they seem to be the only adults on the entire show who are familiar with Vicky's evil ways. They also cover up their daughter's behavior to other parents, and Nicky was quick to get Mr. and Mrs. Turner out of her house when they learned they might be on to Vicky. She loves her daughter Tootie, but is usually too scared of Vicky to protect her or attend her birthday party, though she did attend Tootie's ballet pageant.

If her appearance in a video game is to be taken in consideration, she acted very similar to Tootie in her youth. The dialog of the game suggests she looks like Tootie as well, but she uses the same character model as 5-year-old Vicky from "The Switch Glitch" in-game.

She and her husband are shown to be extremely fearful of Vicky, to the point where they will not attend their youngest child's birthday party because of Vicky's presence there. Their cowardly attitude toward Vicky has baffled many fans, as Vicky has made references in earlier episodes to being afraid of her parents. Perhaps Vicky was afraid of them, until she got the upper hand.

She has only appeared in Season 4 (Channel Chasers) and a few Season 5 episodes. She has not appeared since the show was revived after Fairly Odd Baby.

Her appearance in Breakin' Da Rules

In the video game Breakin' Da Rules, where she is first seen and named, she looks exactly like 5-year-old Vicky as the level featuring her erroneously takes place in 1950's Dimmsdale (Continuity wise, Nicky was a child in 1970). However, she behaves more like Tootie, romantically pursuing Timmy through the stage.

Nicky is almost completely identical to five year old Vicky from "The Switch Glitch" but with Tootie's voice and mannerisms. When the player selects her stage on the level select screen, Timmy comments, "That looks like Tootie; I hope I don't regret this!", and continues to confuse her for Tootie until Cosmo explains that she is Vicky's mother since they are in the past. This suggests that Nicky's design was actually supposed to resemble Tootie's, but the programmers for some reason designed her to resemble Vicky instead, possibly to save time and costs by simply re-using Vicky's character design from "The Switch Glitch", or so that she could more easily be identified as a threat to the player. It is also possible that the game developers mistook 5-year-old Vicky for Tootie and used her character model instead.

When Vicky and Tootie's parents were introduced in the TV special Channel Chasers, this character was widely assumed by many to have been retconed. Because her only prior appearance was in a video game, it is likely the writers completely disregarded this version of Nicky (as well as her name) intentionally. A similar situation befell Vicky's relative Vic who was originally thought to be her father, but Channel Chasers made it clear he was not. However, if she was meant to more physically resemble Tootie like the dialog of the game suggests, then the possibility that that these characters are one and the same cannot be ruled out. Since Vicky's mother has no other given name on the show, Nicky is used by this wiki until something in the main series says otherwise.

The video game version of Nicky, or at least the idea of her being a separate character from Tootie's mother in the show, is still used in Fanon by authors who want to make Vicky and Tootie stepsisters of a different mother, but in terms of actual canon there has been nothing to state that the two sisters are anything but full blooded siblings.

Nicky has been a widely accepted name in fandom, although it has never actually been stated or used in the credits of an actual episode of The Fairly OddParents as of Season 7. Since they both have similar eye color, and the dialog of the game suggests she looks more like Tootie, its very possible that they are the same character.

Template:Note label In the video game Nicky is featured as a child in, the level is said to take place in the 1950s. This is a continuity error, as Timmy's parents are here as well at age ten, when in the episodes "Father Time!" and "The Secret Origin of Denzel Crocker" it was established that they were this age in the 1970's. It can be assumed that Nicky and Timmy's parents are in the same age group. 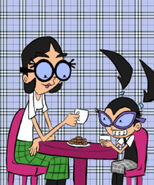 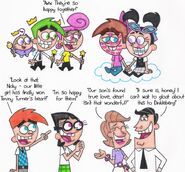 Add a photo to this gallery
Retrieved from "https://fairlyoddfanon.fandom.com/wiki/Nicky?oldid=81254"
Community content is available under CC-BY-SA unless otherwise noted.