Mrs. Powers is a teacher at Spellementary School. She teaches physical education, math, and how to control magic.

Her character is both enthusiastic and kind. Her students (with the exception of Foop) appeared to like her as a teacher. Despite her kindness, she isn't afraid to enforce the rules, as demonstrated when she handled Foop's behavior. She also has a bit of a soft spot for Poof, a possible reason being that he is the last Fairy baby born.

Mrs. Powers has long blonde hair, and wears a teal-colored dress. Her hat is like one from the middle ages, a tall teal cone with a streamer and her dress has a hoop skirt. She has lilac eyes with large eyelashes.Her wand is different from the other fairie's wands, it doesn't have a star.

When Poof and Foop were sent to Spellementary School, Mrs. Powers was their teacher. After introducing herself, she announced that their particular class had a very famous student: Foop!... spelled backwards: Poof!, and then gave each student a textbook and a magic marker, going on to teach math class.

Later on in P.E. class, Mrs. Powers let the students play whatever they wanted. She then sent Foop to sit on the corner as he attempted to set off a bomb in class during nap time, which Poof was able to deactivate in the nick of time, fortunately. In their next class, she announced that the election of a class president would take place. The class nominated Poof, while Foop nominated himself. After listening to their speeches, she counted the votes and revealed that, unanimously, the winner for the place of class president was Foop!... spelled backwards: Poof!. Foop tried to debunk her claim by stating that it couldn't be unanimous, as he voted for himself numerous times. Unfortunately, his "good" second personality informed him that he actually wrote "Poof" on all of the ballots instead of "Foop".

These chain of events prompted Foop to change the school into a dungeon, and he attempted to kill all of his classmates by sending the school into a black hole. Before the evil plot could be carried out, however, everything miraculously returned to normal. Mrs. Powers proceeded to inform Foop that at the end of the day, "you are saved by the bell", causing everything to go back the way it was at the beginning of the day. She then gave Foop detention for his actions, but Poof kindly asked Mrs. Powers to lift the punishment, which she complied to. The two enemies then proceeded to return to their respective homes.

In "Love Triangle", she informed her students of the Mr. Cookie play which Poof and Foop did not like at all. However when they find out that Goldie Goldenglow will play the main female role, they decide to audition for the main male role in the play to win Goldie's heart. Poof wins, but Foop changes the play's name and plot to make him get Goldie. Poof overhears this and pretends to be sick to make Foop's plan backfire on him. It works and Poof still ended up getting Goldie. 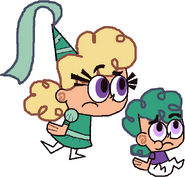 Little Ms. Powers and her sister Lizzy.
Add a photo to this gallery
Retrieved from "https://fairlyoddfanon.fandom.com/wiki/Ms._Powers?oldid=19579"
Community content is available under CC-BY-SA unless otherwise noted.