Mary Alice Doombringer (also known as Mrs. Sunshine) is one of the minor antagonists of The All New Fairly OddParents!. Ms. Doombringer is the most serious and competent villain that Timmy has ever faced.

It is unknown of how Ms. Doombringer became a fairy hunter and when she discovered the existence of fairies and when she killed her first fairy.

When disguised as Mrs. Sunshine, she is dressed like an old western school teacher with white and pink clothes and flowers in her hat. As a cashier in a pizza restaurant, she has a red shirt, white pants, and a yellow hat. She had orange hair and teal green eyes. As Ms. Doombringer, she has white hair, orange eyes, and wears a black costume along with a purple headband, both adorned with skulls.

Unlike most of Timmy's enemies who are either incompetent and comedic, Ms. Doombringer possesses no such trait. Instead, she is competent, dangerous, and serious. Also, she is far more dangerous and crazier than Mr. Crocker. 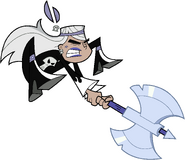 Add a photo to this gallery
Retrieved from "https://fairlyoddfanon.fandom.com/wiki/Ms._Doombringer_(The_All_New_Fairly_OddParents!)?oldid=78846"
Community content is available under CC-BY-SA unless otherwise noted.