Mark Chang is a Yugopatamian alien from outer space. He is (normally) constantly asking for Timmy Turner's help to save his home planet from danger. He lives on Earth in the Dimmsdale Dump with his spaceship. He also wears a w:c:fairlyoddparents:Fake-i-fier:fake-i-fier which frequently malfunctions, and so he & Timmy later decide to make an upgraded version, titled the Fake-i-fier 2.0. 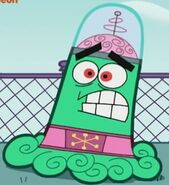 Mark, As he appears in the show

Mark as a baby
Add a photo to this gallery
Retrieved from "https://fairlyoddfanon.fandom.com/wiki/Mark_Chang?oldid=33664"
Community content is available under CC-BY-SA unless otherwise noted.