Jillian Marium {Insert Last Name Here} is the daughter of Norm the Genie and Norma the Genie. She is yet another enemy/rival of Angel Callie.

Jill is yet another enemy/rival of Angel Callie. She is a Genie Baby, and also the first Genie Baby born in THOUSANDS of years! She tends to pick on and mock Angel quite often (As seen in picture above), And she is also Best Friends with Felicia WingGlider, Who is also Angel's other rival!

Jill looks much, much, MUCH like her mother Norma and her father Norm. Yet she is MUCH more rude and hateful, But it is revealed they do not care much about her sore additude. She has curly, puffy hair and has a ponytail like her mother. She wears a dress that matches her tail, and (for a strange reason) she has Fairy Wings. Her eye color is Purple. She also has earrings like her parents do. She does wear diapers, But they are never really shown.

Jill is a ruthless, hateful young Genie girl that does not like to be messed with.

Jill has appeared in the following episodes: 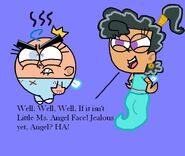 Add a photo to this gallery
Retrieved from "https://fairlyoddfanon.fandom.com/wiki/Jill?oldid=11685"
Community content is available under CC-BY-SA unless otherwise noted.