Foop is very rebellious and likes to annoy his grandfather immensley. Most of his family members annoy him, including his uncle, Sanderson , and his younger sister, Anti-Rosemary . Often without his father 's consent, he joins him and his grandfather on their adventures, sometimes helping, sometimes just being a nuisance. Foop acts like he knows everything, but in reality, can be very clueless when it comes to certian situations.

Foop started developing feeling for his cousin around their teen years, though she was oblivious to his advances at first. In the future, they are married and have a son, Lester.

In this AU, Sidney left Foop for The Earl of Lemongrab because he was too busy to attend to her needs. At first, him and Lemongrab were mortal enemies, then became friends, then enemies for like a day, then friends again. He has now come to terms and has moved on. 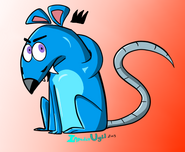 Foop as a rattus norvegicus

thumb|Foop proceeding to be a dragon even though he doesnt have periods (i dont think?)

foop proceeding to mark his territory as a canis lupus
Add a photo to this gallery
Retrieved from "https://fairlyoddfanon.fandom.com/wiki/Foop_(Twistdom)?oldid=36751"
Community content is available under CC-BY-SA unless otherwise noted.