Flyshy Flyshy Callie is the 3rd cousin of Angel Callie and the 12th fairy baby born in thousands of years. She is just the cutest thing, but she is afraid even of her own shadow, and she is pretty much scared and nervous all/most the time. She first appeared in the episode Spellementary School 3 Where she and her sisters were introduced to Poof and the rest of the babies by Angel. Flyshy has also appeared in Lulu's in Love along with her sisters but for only for a short amount of time. Flyshy really never does talk, But when she does, you can barely hear her. She is voiced by Tara Strong and sometimes Taylor Swift, Who also does the voice of Flowerbloom Callie (Flyshy's 2nd Oldest sister). Flyshy is also the weakest flyer in her family, unlike her evil Anti-Counterpart, Anti-Flyshy

Quotes (She doesn't speak that much

Flyshy isn't so good at being Fancy... 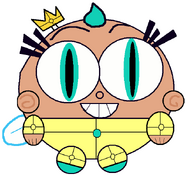 Flyshy as an adult
Add a photo to this gallery

Retrieved from "https://fairlyoddfanon.fandom.com/wiki/Flyshy_Callie?oldid=20134"
Community content is available under CC-BY-SA unless otherwise noted.