Dimmsdale is a city in California where most of the cast lives, including Timmy Turner and his parents, friends, and enemies.

Timmy and the Cockroaches

Timmy's house - the place where Timmy lives. It resembles Timmy's house in FOP except that the interior is larger than the exterior! Paradise Towers - Twin towers that resemble the pre 9/11 WTC. (Except that the antenna has a star). This is where Zack works.

NW Mall - Based on the Dimmsdale Mall, The NW Mall is a super massive shopping mall that has every shop that a Dimmsdale citizen requires. It has tenants from the show's original counterpart. First appeared: Shopping Frolic.

Dr. Bender's Clinic - the place where Timmy went when he had hiccups. He was in a hiccup curer chair. Everytime he hics, a mallet goes out and hits him or a hand that slapped him. But the roaches took over the machine by tying up Timmy and the roaches made fake hiccup sounds that causes the machine to go crazy! First appeared: Hic! Hic! Hiccup!

2. Wall 2 Wall Mart - Parody of Walmart, The shop sells anything from Electronics to Military Planes. The store occupies all 18 floors on a seperate building connected via skybridge.

3. NW Supermarket - The supermarket that Timi and Timmy goes to shop for food and stuff. Located near the skybridge of Wall 2 Wall Mart.

5. NW Cinemas - The place where people watch movies. It features 15 cinemas on the 5th floor. With one 3D Cinema. This will appear in an unnamed episode of T&TC.

Need For Speed Most Wanted-Dimmsdale Drift

In this series Dimmsdale plays a big role. It's here where most part of the series is placed. In this series, the city is shown to be near Los Angeles, and the city is divided in 6 districts, placed in a pentagon shaped plant. The districts are: 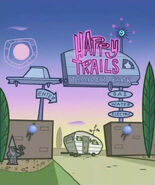 The Dinkleberg's House
Add a photo to this gallery 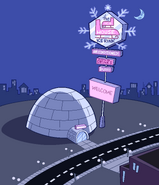 The Ice House Skating Rink
Add a photo to this gallery
Retrieved from "https://fairlyoddfanon.fandom.com/wiki/Dimmsdale?oldid=76790"
Community content is available under CC-BY-SA unless otherwise noted.