"I was just in a non-lethal accident in my record company's car. All of a sudden I seemed to hit this tree that popped out of nowhere. Totally weird."
— Chip Skylark, "Boys in the Band"

Chip Skylark the Third, usually called Chip Skylark is a famous singing sensation and he is one of Timmy Turner's friends.

He first appeared in "Boys in the Band", were he was performing a live show on the same day as Timmy's birthday, Timmy was furious at the singer because his concert had distracted his parents from his birthday so to get revenge he wished that something bad would happen to Chip, this resulted in Chip being trapped in Vicky's clutches (also a Chip Skylark fan) who was planning to marry him by force and chained him up in Timmy's room, during this time Timmy came in to gloat in his face and revealed the reason he disliked him was because his concert was affecting his birthday Chip then revealed that it was also his birthday so he knew how he felt so to apologize he gave Timmy a Crash Nebula action figure, after this they became good friends and worked together to escape Vicky and get to the concert and in the end they even got to make fun of Vicky on national television with his new song icky vicky. Ever since he and Timmy have been good friends. It is revealed in The Good Old Days, that his full name is "Chip Skylark the Third." A few other scattered facts about Chip: The sound of a flushing toilet calms him down, disappointed fans cause his teeth to turn yellow, his teeth are amazingly white, and is greatly admired by the tooth fairy. In the episode "Chip Off the Old Chip" he lost his career after messing up the national anthem at bankee stadium due to Timmy's wish to switch voices. He becomes a delivery boy for poorly sung pizza and gets his career back when Timmy switches their voices and they sing. He is often featured on Teeth TV, hosted by Brad Cuspidor.

Chip Skylark has performed three songs so far, below is a list of the songs. 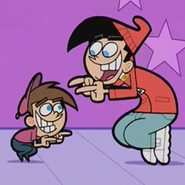 Chip Skylarks Shiny Teeth
Add a photo to this gallery
Retrieved from "https://fairlyoddfanon.fandom.com/wiki/Chip_Skylark?oldid=73561"
Community content is available under CC-BY-SA unless otherwise noted.