Blackberry is the Future daughter of Angel and Pentrenellistheniso. She is Half Fairy/Anti-Fairy baby whose Species is rather shocking. She is not like other Fairies or Anti-Fairies...

Blackberry wears a Dark-Indigo Jumpsuit/Sleeper with Dark Blue eyes. She has a strand of curly Black hair on her head.

Blackberry appears in almost every episode of the Fairly Odd Future Series.

Blackberry is a frisky, Bittersweet, Clumsy baby with the touch of a lamb and the mood of a lion. 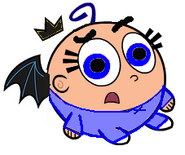 Blackberry (Actual Form)
Add a photo to this gallery
Retrieved from "https://fairlyoddfanon.fandom.com/wiki/Blackberry?oldid=20139"
Community content is available under CC-BY-SA unless otherwise noted.