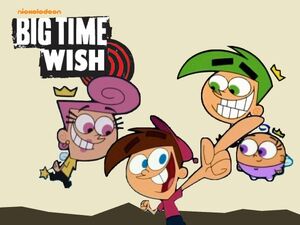 Big Time Wish is a fan made Fairly OddParents spin-off where Timmy, Cosmo, Wanda and Poof are a band called Big Time Wish, Jorgen is the band's manager and Tootie is it's number one fan.

Timmy wishes that he and his Godparents become a successful band, but Jorgen only allows Timmy to make this wish if he would become the band's manager. Tootie becomes the number one fan of the band, called Big Time Wish.

He's the band leader.He wished for having a wonderful talent for singing and became the

He plays the triangle on the band.He's always doing crazy stuff and putting the band in trouble

She's kind and smarts.She plays the piano in the band.

He's a Fairy Baby and just can say his name.He only dancer of the band.

She's Big Time Wish's number one fan and follows the band everywhere.She's in love with Timmy

Retrieved from "https://fairlyoddfanon.fandom.com/wiki/Big_Time_Wish?oldid=76834"
Community content is available under CC-BY-SA unless otherwise noted.