Anti-Rosemary is the only daughter and second child of Anti-Cosmo and Anti-Wanda . Though she takes more after her mother in more than one field, she can have logical thought when she feels like it. Most of the time she doesn't feellike it because she likes messing around with everyone.

She REALLY loves to annoy her older brother, Foop , and is highly overprotective of her younger brother, Anti-William.

Gnomes: Anti-Rosemary dislikes Gnomes for reasons unknown. This was hinted at when she first saw Martin, the baby Gnome that Sidney had adopted, and was more than willing to rat her out to Sanderson. She loves the taste of Gnome meat, which she probably gets from Anti-Janice, her old and cranky grandmother.

Sticks: She likes to fling sticks at people and walls.

Fairies: She doesn't really give a -DOLPHIN NOISE BECAUSE APPARENTLY I HAVE TO CENSOR -DOLPHIN NOISE-- about them as long as they aren't hurting her family and/or friends she doesn't have because mary-sue.

Anti-Rosemary is one of the many subjects of Invadermay123 and InvaderUgli's AU, or Alternate Universe, RPs. In one AU, she was caught cheating on her boyfriend, Eric, with her genderbent. In another she comitted suicide by lethal injection. In yet another, she was taken from her parents when she was just born and later rescued by H.P. at the age of five.

There are many other examples that will follow shortly..maybe. 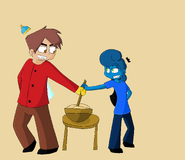 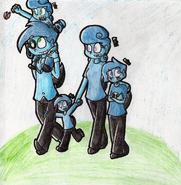 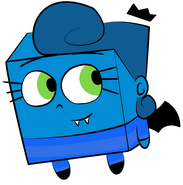 Add a photo to this gallery
Retrieved from "https://fairlyoddfanon.fandom.com/wiki/Anti-Rosemary?oldid=27297"
Community content is available under CC-BY-SA unless otherwise noted.